I began Annas Bay Books in 2019. I serve as editor, book designer, and publisher (currently through Amazon's KDP service) for select projects. My aim is to deliver a beautiful  and well-edited book, empowering others to realize their dreams of book publication so they can share their writing with friends, family, colleagues, and the wider world. Interested in publishing? Contact me. 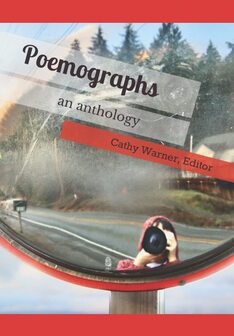 POEMOGRAPHS: AN ANTHOLOGY: Thirty photos in thirty days. More than a dozen poets let their creativity loose in response to images appearing in their inbox every day of April 2021. The result: Poemographs. This anthology is their contribution to National Poetry Month and a snapshot of the ongoing conversation between writing, art, inspiration, and creativity. Turn the pages and follow the photographer and poets as they share imaginative journeys to unique destinations.

EDITOR'S NOTE:  As part of National Poetry Month April 2021, I sent a daily photo to twenty writers for thirty days, and we posted our responses in a private Facebook group. I emailed the photo without any explanation. It was incredible to see the many ways in which a single image inspired wildly different poems. All the photos were my own, and taken over several years. Since moving to the incredibly scenic Pacific Northwest almost a decade ago, I have snapped thousands of photos as a meditative practice of noticing the world around me, and as a way to share the incredible beauty of my current surroundings on Washington’s Hood Canal with others.
​I’m thankful to have had such talented writers accompany me over the month and it’s gratifying to share a sampling of their words with a wider audience. Enjoy our creative endeavor. May it spark your imagination.

VIRAL VERSE: POETRY OF THE PANDEMIC is a vibrant anthology of 70 poems contributed by 24 U.S. poets. The outgrowth of a virtual community writing on daily prompts while sheltering at home during the COVD-19 crisis, Viral Verse is an exploration of, and antidote to, the daily news cycle. These 24 writers brilliantly convey the beauty and terror of human experience in the world we inhabit as they speak to this particular moment—social distancing, flattening the curve, Zoom—and beyond. In these pages they carve out space for worry and welcome, pain and possibility, humor and hope, fear and faith, nature and nurture, yearning and you. Join them.

EDITOR'S NOTE: In mid-March 2020 schools and libraries were ordered closed in Washington state where I live, and social distancing was in full-swing. Faced with a time of sequestering that loomed indefinitely, I knew I needed to connect with others in a meaningful way by creating beauty during a time of anxiety.

I’d already committed to providing a poetry prompt each day of April in honor of National Poetry Month so, I began sending out a daily poetry prompt on March 15th. Sixteen people opted to receive daily email prompts, our Facebook group grew to 38 members, and our virtual community spread from Washington to California and Arizona to New York, North Carolina and Alaska.

From the beginning I was astounded as these poets turned nimbly from one topic to the next, so often weaving in the pandemic and its impact on all of our lives. Their poetry expressed my own worries and small consolations and offered new insight. They bruised my heart and patched my flagging hope.

I knew these poems deserved a wider audience, and envisioned an anthology about living under “lockdown” in the time of the COVID-19 virus. Our collection would honor the community we created and showcase work from each participant. Viral Verse, published on April 28, 2020, is the result of that vision. Our offering to one another and to you.


Temecula, CA, July 31, 2019--Duane Preimsberger wrote his memoir, Badge of Honor: Memories of My Life in Law Enforcement, to honor the courage, caring, commitment, and comedy of the men and women he served alongside during his 35 years with the Los Angeles County Sheriff’s Department (LASD). Now that his memoir is published, Preimsberger plans to honor the City of Hope with the book’s proceeds.

Preimsberger began his career as a deputy with the LASD at the age of 20 in 1961. A few years before retiring as Assistant Sheriff in 1995, Preimsberger was diagnosed with a rare sinus cancer and received treatment at the City of Hope. In response, he and his deputy sheriff wife, Judy Preimsberger, formed a fundraising and blood donation chapter for the City of Hope, the Duarte-based research and treatment facility specializing in catastrophic illnesses. It was the first law enforcement chapter of its kind in the nation and has procured several million dollars and many gallons of blood for the City of Hope. Preimsberger is donating all author royalties from the sale of Badge of Honor to the City of Hope.

In his colorful memoir, Preimsberger recounts delivering a baby, holding a dying drunk driver in his arms, patrolling the Watts Riots, interacting with East Los Angeles characters like Scooter Man and Scuba King, rappelling from helicopters, tracking a mass murderer, supervising detectives with monikers like Pumpkin Head and Turkey, coordinating athlete transportation for the 1984 Olympic Games in Los Angeles, introducing laser weapons training to the Sheriff’s Training Academy, and much more.

Preimsberger’s writing has appeared in dozens of newsletters, newspapers, and magazines including the FBI Journal. He has won multiple awards from the Erle Stanley Gardner Murder Mystery Writers Contest and is included in the anthology Felons, Flames, and Ambulance Rides. He and his wife have made their home in Temecula since retiring. He has served on the board of the Hospice of the Valleys, City of Hope Patient and Family Care Advisory Council, Assistance League of Temecula Valley, Canine Support Team, and the Temecula Valley Museum where he also acted as a docent.
Purchase Badge of Honor